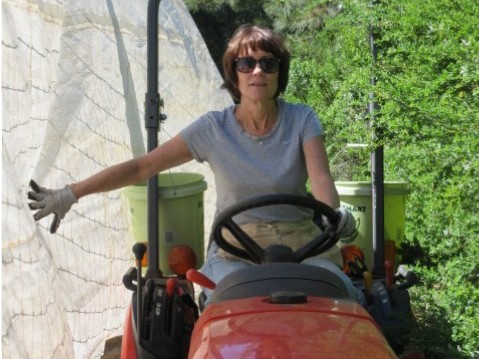 Mid-July marks the middle of the 7 month growing season on Howell Mountain that usually ends with harvest in late October. So far so good, but we have a long way to go to get the fruit ripe. We need dry, warm, and sunny days for the next 3 1/2 months. Who doesn’t?

End of frost season :
Frost season normally ends June 1 on Howell Mountain, although we had a few nights in the high 30s in early June. That’s when we removed the 600′ of frost tarps we hung in March on the fence bordering the vineyard. Each of the 20 tarps is 30′ long and 8′ high. Each tarp has grommets 18″ apart through which we insert a rope tie to hang it on the fence. In the past, Gerry moved a step ladder along the fence line installing and removing the ties. 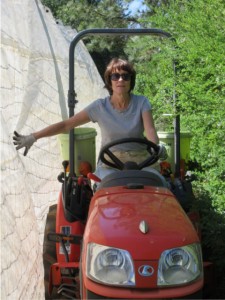 Barb always tells Gerry we have to work smarter not harder. We’re old! This year we used our tractor as a moving platform. Barb drove the tractor along the fence line stopping frequently so we could both remove rope ties simultaneously. We had all the tarps down in under 2 hours with many fewer aches and pains. It’s not as entertaining for Barb because she no longer sees Gerry jumping off the ladder as it’s falling. It’s good to be older and wiser.

Flowering :
Also in June the vineyard goes through flowering or bloom. This is when the grape clusters are pollinated. Grape vines are self pollinating. In the accompanying photo, you see long clusters with tiny white hairs. 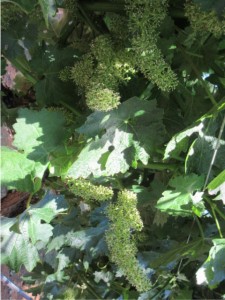 Those hairs move naturally on the cluster to complete pollination. During bloom, about a 3 week process, we hope to avoid rain, wind, and heat spikes. Those events can interrupt pollination and cause shatter resulting in unwanted spindly clusters. It looks as though pollination was successful and we have a good fruit set.

Tucking :
Each year the canes have to be tucked through 2 levels of training wires. We want the canes to be as separate and straight as possible. The grape clusters need air moving between them and plenty of sun shining on them to get ripe. Tucking through the low wire is relatively easy and fast. We did that in May.

Tucking through the high wire is much more difficult and time consuming because the canes are heavier and more than 8′ tall. In the accompanying photos, you are looking at the same row. Before we begin, the growth is so thick, it’s impossible to see the length of the row. It looks as though Barb is standing in the middle of a jungle. 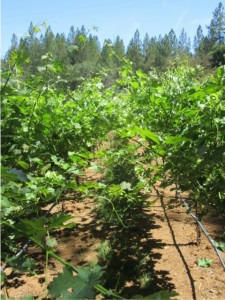 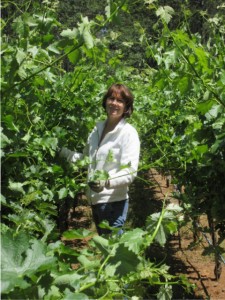 One hour later, the same row is fully tucked through the high wire. Each row is 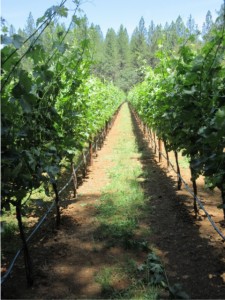 about 400′ long and we have 45 rows. Physical activity is good for us right?

Our 2013 Cabernet Sauvignon from our vineyard will be bottled in August and probably released in the fall of 2017. We are very pleased with how our 2014 Napa Valley Zinfandel and 2014 Howell Mountain Cabernet Franc are developing in the bottle. We plan to release those 2 wines in the fall of 2016. Enjoy Summer.