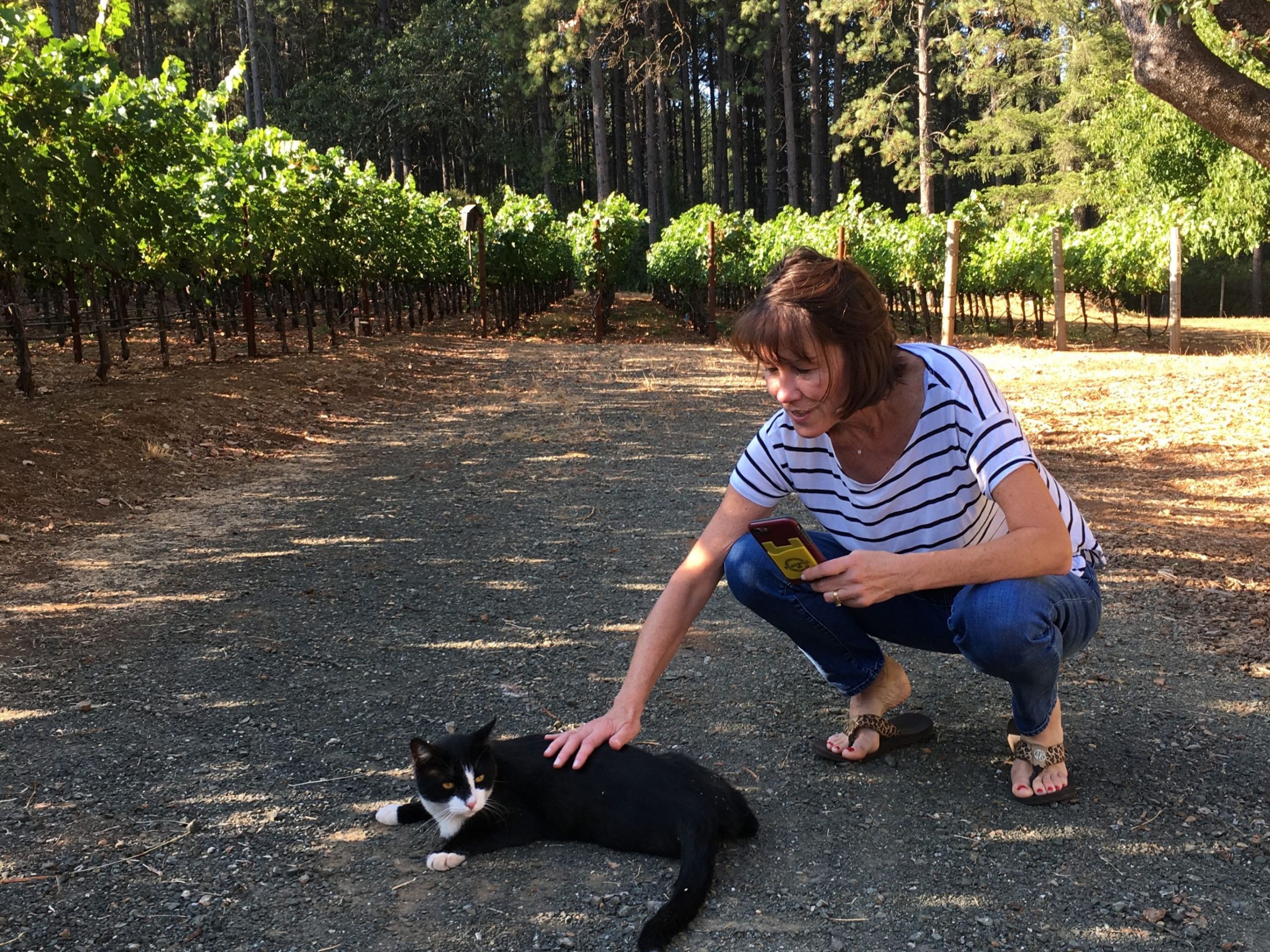 Tom has a twin brother

A few years ago we introduced you to the feral cat that hunts varmints in our vineyard. We affectionately call him Tom. In early August, the cat in the photo walked onto our property. We thought it was Tom, until he playfully approached Barb. We can’t get within 20 feet of Tom. We call our new feline friend Thomas because his palate is much more sophisticated than Tom’s. He eats our Cabernet Sauvignon grapes, not vineyard vermin. 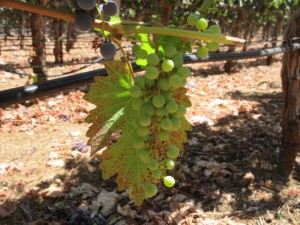 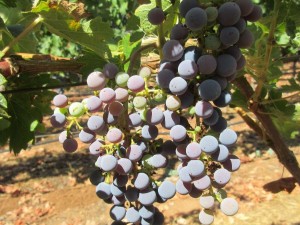 August and September are busy months in the vineyard. We began by walking the 50 rows of our vineyard and cutting off all the clusters that won’t be harvested, including second crop and shattered clusters.

Second crop clusters can form anywhere on the vine, including 6 inches above the ground, as shown in the photo. Those clusters develop much later than the primary crop and never get ripe. We drop all second crop because the vine will divert its limited energy attempting to ripen those clusters.

The second photo shows a shattered cluster. Notice the space between the berries. Shatter results from irregular pollination. We want only full and tight clusters. 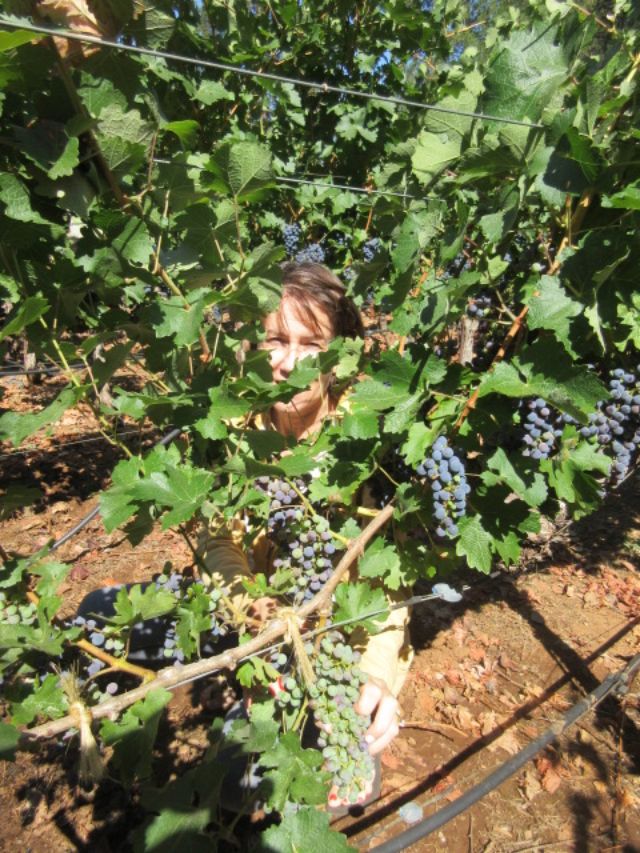 When veraison is about 85% complete, we walk the 50 rows again and drop every cluster that isn’t at least 85% through veraison. Look at the cluster Barb is holding compared to the others on that vine. That cluster will not be as ripe as the others on the day of harvest, but it will be just as blue. We have to drop it while we can distinguish it from the others. 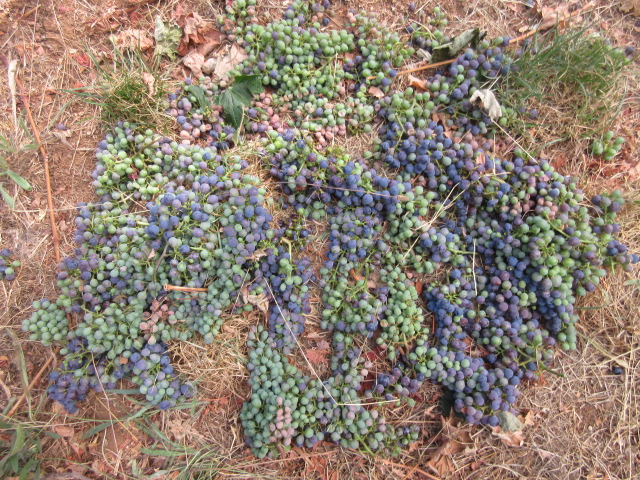 This vine didn’t get the memo

Some vines are just problem children. We dropped all the fruit on this and many other vines at the end of August because they’re too far behind. It normally takes the vines about 60 days after veraison is complete to ripen all the hanging clusters. Ideally, veraison is complete the third week in August so we can harvest by the end of October. With cool nights and short days, not much ripening occurs in late October. 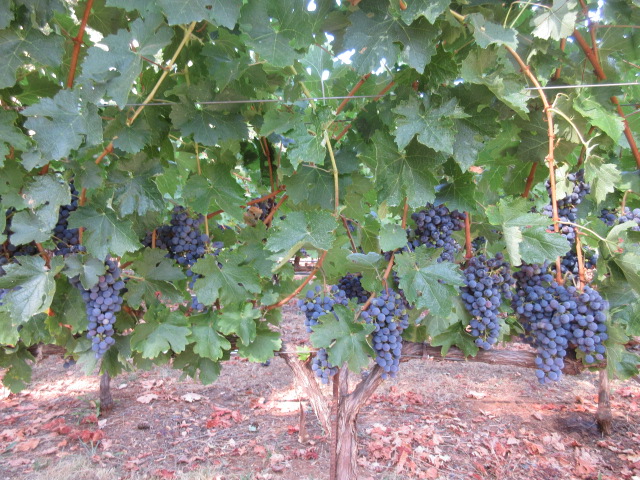 This year we completed veraison September 3. That puts harvest at about November 2. Last year we harvested November 8. 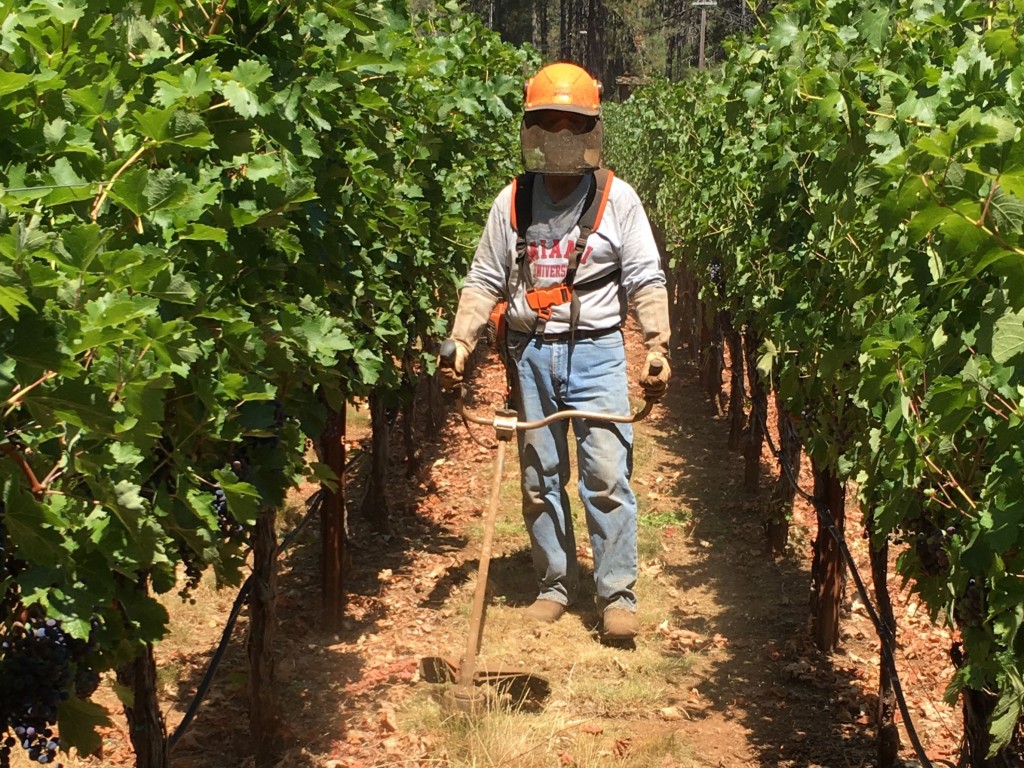 Who is that masked man?

Barb wishes she could say “I don’t know that man.” October is the most vulnerable month for wildfire because it’s normally the last month of the dry season. Gerry weed whacked the entire vineyard to minimize the risk of a grass fire and fall frost damage. The cover crop between each row must be mowed to the ground to allow our frost fighting machine to work. We’re not allowed to use our tractor for mowing during wildfire season. The metal blades could strike rocks and spark a grass fire. 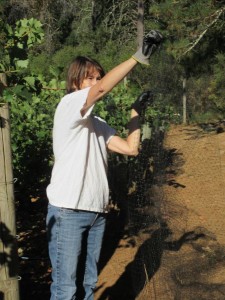 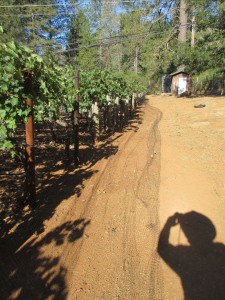 Protecting the vineyard from the enemy

The last thing we do is wrap the perimeter of the vineyard in bird netting to keep our fowl friends from walking into the vineyard and eating endlessly. The key is to drape the netting on the ground. Quail wont walk on the netting. 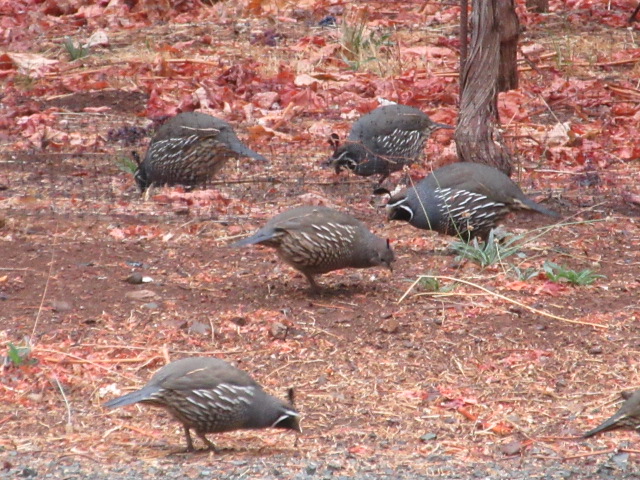 This is the enemy!

They look dangerous, right? Don’t be fooled by their fine feathers and cute faces. Quail have voracious appetites. A few years ago, before we netted the perimeter of the vineyard, 50 plus quail ate all the grapes on the 2 end rows of the vineyard. That’s about 200 vines. We’re as kind and generous as the next farmer, but that’s quite a gift.

To make it a fair fight, we don’t prevent the quail from flying in and out of the middle of the vineyard where they can eat all they want. Those stubborn critters wanna walk. Maybe they can’t fly out with a belly full of berries. 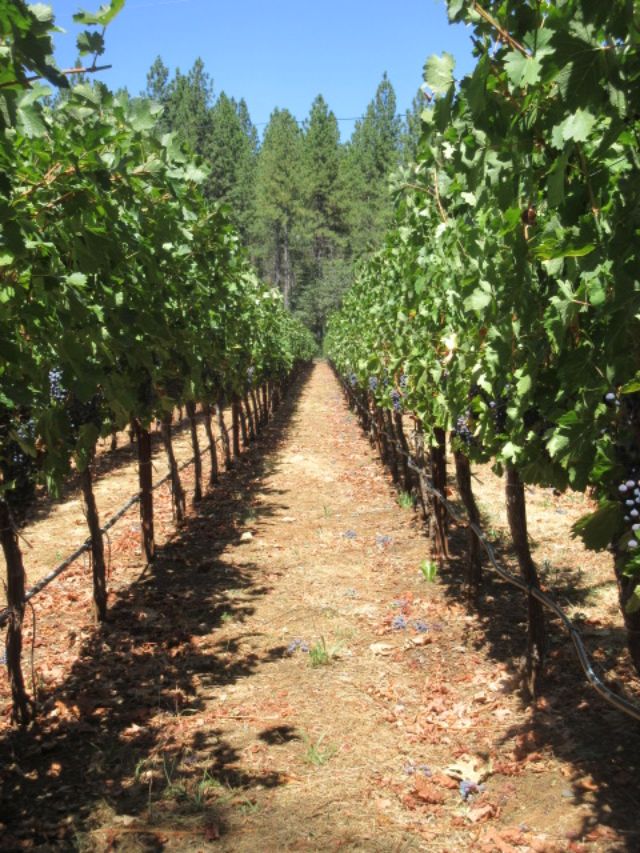 Now we wait and pray for rain, but not before harvest unless there’s a wildfire. That’s not too much to ask, is it?