Ready or not, here we go again…

Relax Tom. It’s remarkable that a year ago, if we got within 50 yards of Tom, he’d run fast and far. Now he sits confidently on our garden bed, 20 feet from our back door, as if he owns the place.

Tom is one prong of our critter control program. He hunts gophers and moles that tunnel in our vineyard and kill vines. Recently Tom discovered that he can hunt all over our property. Does anyone know how to train a ferrel cat to hunt exclusively in our vineyard? 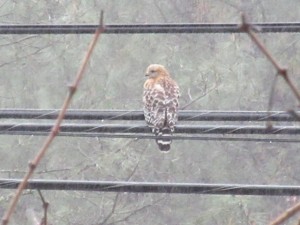 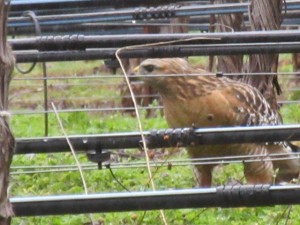 The second prong of our defense program is an aerial attack from a red shouldered hawk couple. Red likes to sit on the telephone wire high above the vineyard. When he sees a varmint digging near the surface, he swoops down to snatch it. Although we’ve seen Red and his partner together in the vineyard this year, it’s been infrequent. We fear their relationship is on the rocks. 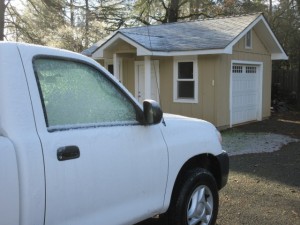 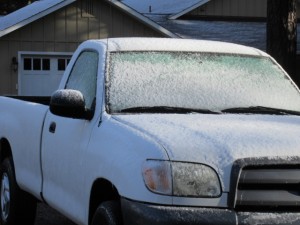 Amidst this entertainment, we resume our vineyard work. It’s been tough getting started this year because it’s been so cold and we’re old. We’ve had more frost mornings this year than ever. Look at Gerry’s pickup truck so frosted with ice he couldn’t drive it.

Don’t feel sorry for him. The tractor he drives fewer than 50 hours a year is always parked in the tractor garage completely sheltered from the elements while the truck he drives nearly every day is always out. In her next life, Barb wants to return in the form of Gerry’s tractor. 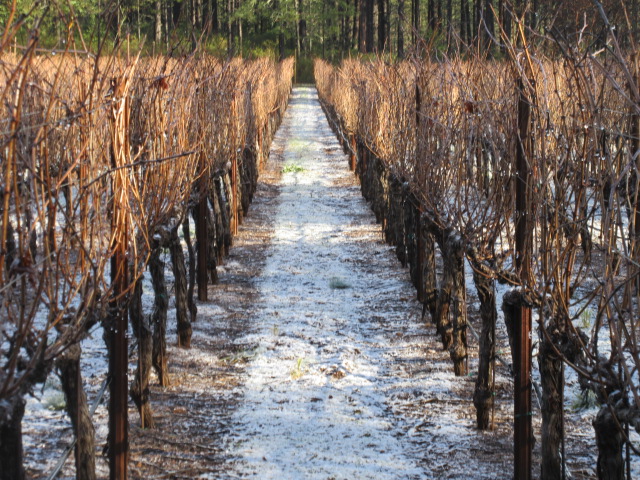 We even had snow on March 2, two days before the Napa Valley marathon. It didn’t snow on the runners but it rained. March was exceptionally rainy. Typically it doesn’t rain here between April and November. Nothing is typical this year. We’ve already received 4” of rain in April. We don’t mind March and April rain. It doesn’t affect the vineyard and it helps reduce our wildfire risk. We’ve received about 40” of rain this season, 80% of average. 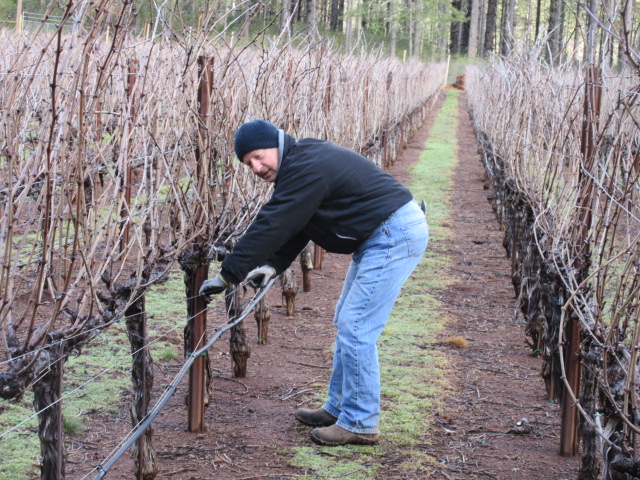 But we press on …. We prepared the vineyard for pruning by moving the 2 training wires below the cordons (the arms of the vine). During the growing season, the canes attach to the wires with tendrils. Gerry pulls the wires, breaks the tendrils, and secures the wires to the stakes. 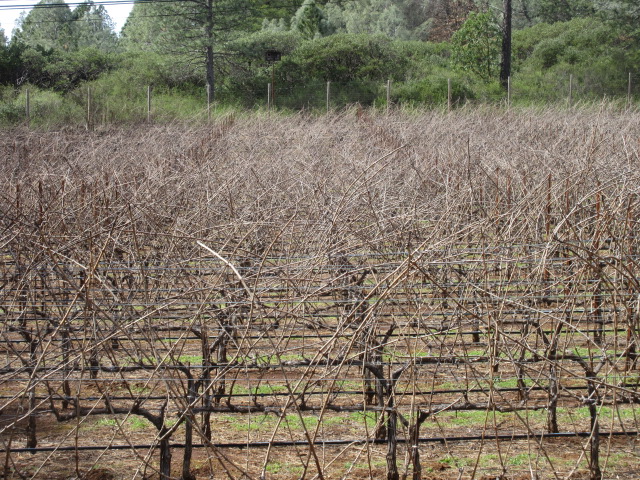 When our vineyard manager’s crew arrived March 26 for pruning, they saw this morass of canes. With the wires out of their way, it’s much easier for them to prune because they don’t have to wrestle the canes out of the wires. They quickly cut the canes and pile them in the rows. 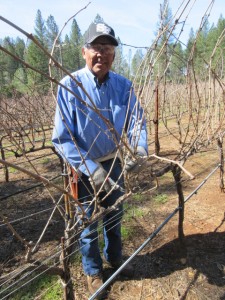 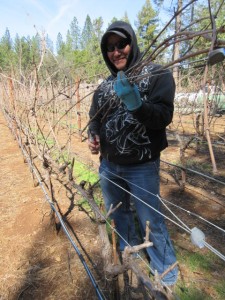 These guys should be in Hollywood with those million dollar smiles. 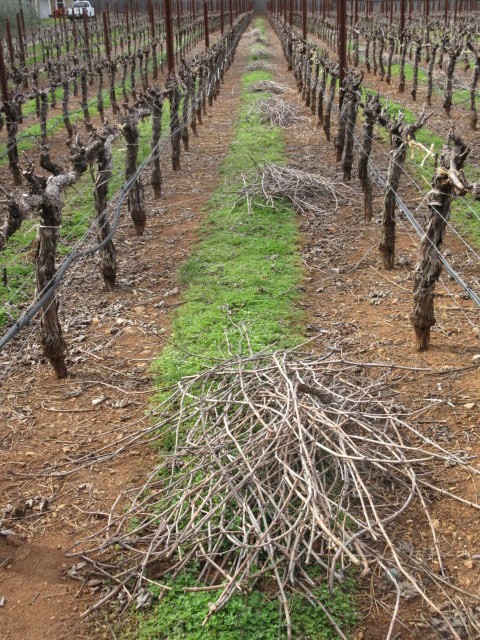 Two days later, our vineyard crew smiles and waves goodbye. That morass of canes is now in piles in the rows. 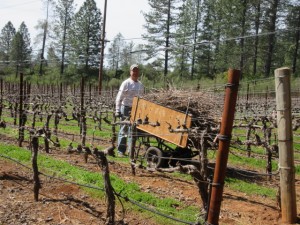 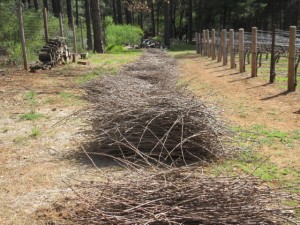 Gerry is using his modified electric wheelbarrow to haul the canes to the aisles on each end of the vineyard. Anybody wanna play a week long game of Pick Up Sticks? 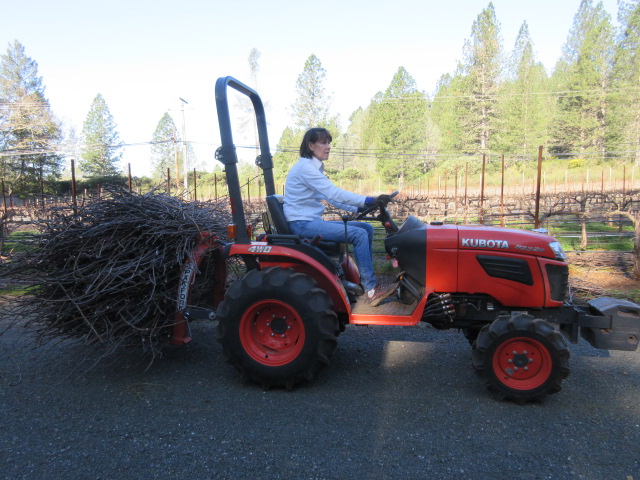 Barb said, “If you want me to play, I drive the tractor.” You go girl! 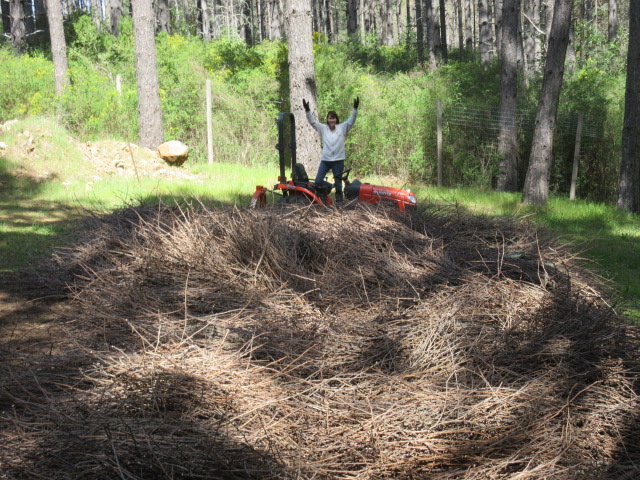 That pile consists of about 73,000 canes, but who’s counting when you’re having fun. Barb declares “It’s happy hour! Yay!” Don’t be too impressed. She declares that everyday at 3 pm. It’s 5 o’clock somewhere, right?

Our wine sales are brisk. Thank you so much for your continuing support. Normal ground shipping will probably end in mid-May because of rising temperatures. If you want to order wine while favorable shipping continues, please click on the button below.