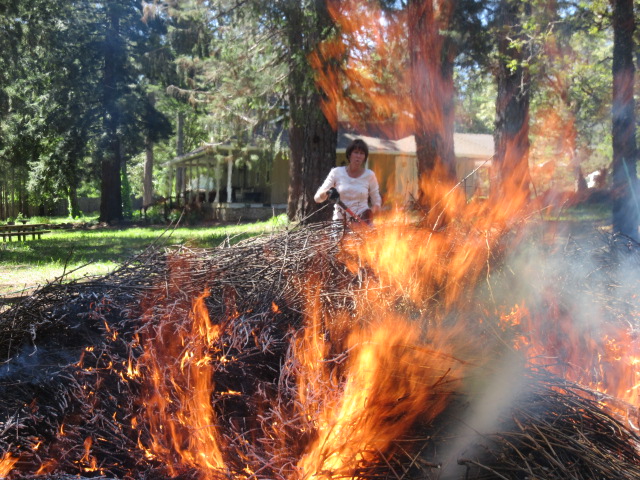 The burning of vineyard canes is widespread in the Napa Valley January through April when there is minimal wild fire danger because of the winter rain. This is an agricultural community that supports the vineyard owners’ need to burn their prunings. It is a regulated process that includes obtaining a burn permit, getting agency permission on the selected burn day, and notifying the local fire department before starting.

Each year we burn the prunings from our vineyard. In the accompanying photo, Barb is managing one of the two fires.

She really likes burning the canes. She was always dragging Gerry to pep rallies that featured bonfires at their rural Illinois high school. It all makes sense now. Who knew? 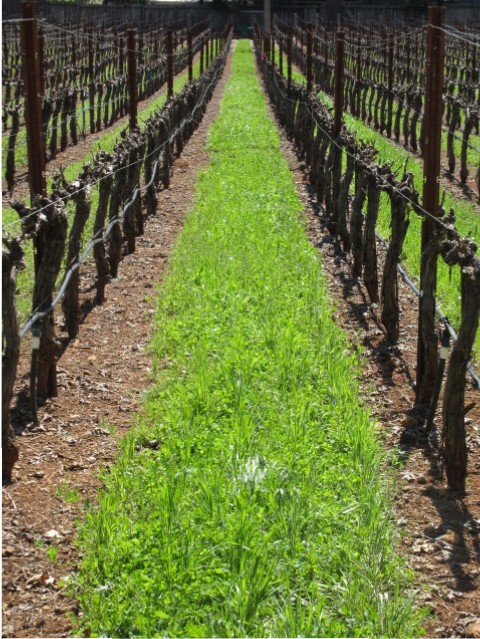 It’s short lived excitement.  Four hours after we struck the first match both piles were reduced to very small mounds of ash.  We’re glad we made it through another burn day although we have a little less hair and shorter eyebrows.

Notice the thick and tall cover crop growing between each row of vines. This is a permanent cover crop that stresses the vines. The cover crop draws moisture and nutrients from the ground in competition with the vines. Stressed vines produce intensely flavored fruit. The accompanying photo was taken soon after pruning. The cover crop is at its peak, and there is no new growth on the vines.

All of this growth occurred despite very unusual April weather on Howell Mountain. We had several rainy days, even more windy days, and many days during which the high temperatures did not exceed the 50s or low 60s. We also had three nights of temperatures in the low 30s. That’s the reason the next photo shows the cover crop mowed. 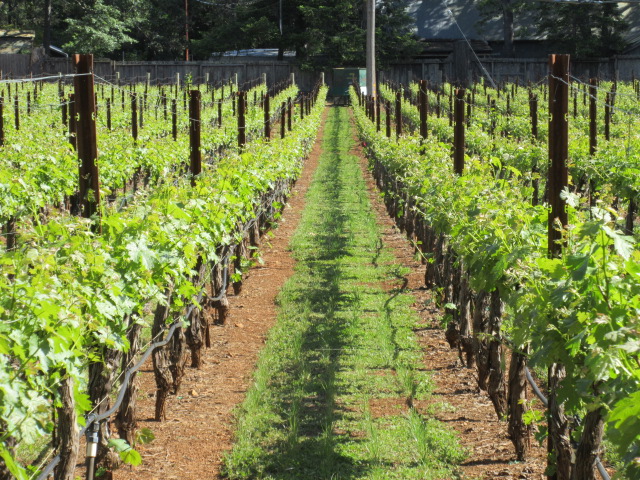 The cover crop is an obstacle in frost season. The frost layer that accumulates on the ground moves by gravity to the cold air exhaust machine that’s positioned on the low end of the vineyard. To facilitate that movement, the cover crop must be mowed about every 10 days throughout April and May.  Gerry’s favorite job is mowing the vineyard with his tractor.

About 4 weeks after pruning, the grape clusters formed this year. You see in Gerry’s hand 2 tiny clusters. Each shoot produces 2 clusters. If everything goes as we hope, six months from now each of those clusters will be bigger than his hand.

Our 2013 Cabernet Sauvignon from our vineyard will be bottled in August and probably released in the fall of 2017. We are very pleased with how our 2014 Napa Valley Zinfandel and 2014 Howell Mountain Cabernet Franc are developing in the bottle. We plan to release those 2 wines in the fall of 2016.

Last Call:
Memorial Day usually signals the end of ground shipping until the fall when cooler temperatures prevail. If you need more Seek 2013 Napa Valley Zinfandel to get you through the summer grilling season, please order it now so we can ground ship it to you before Memorial Day and before it’s sold out.