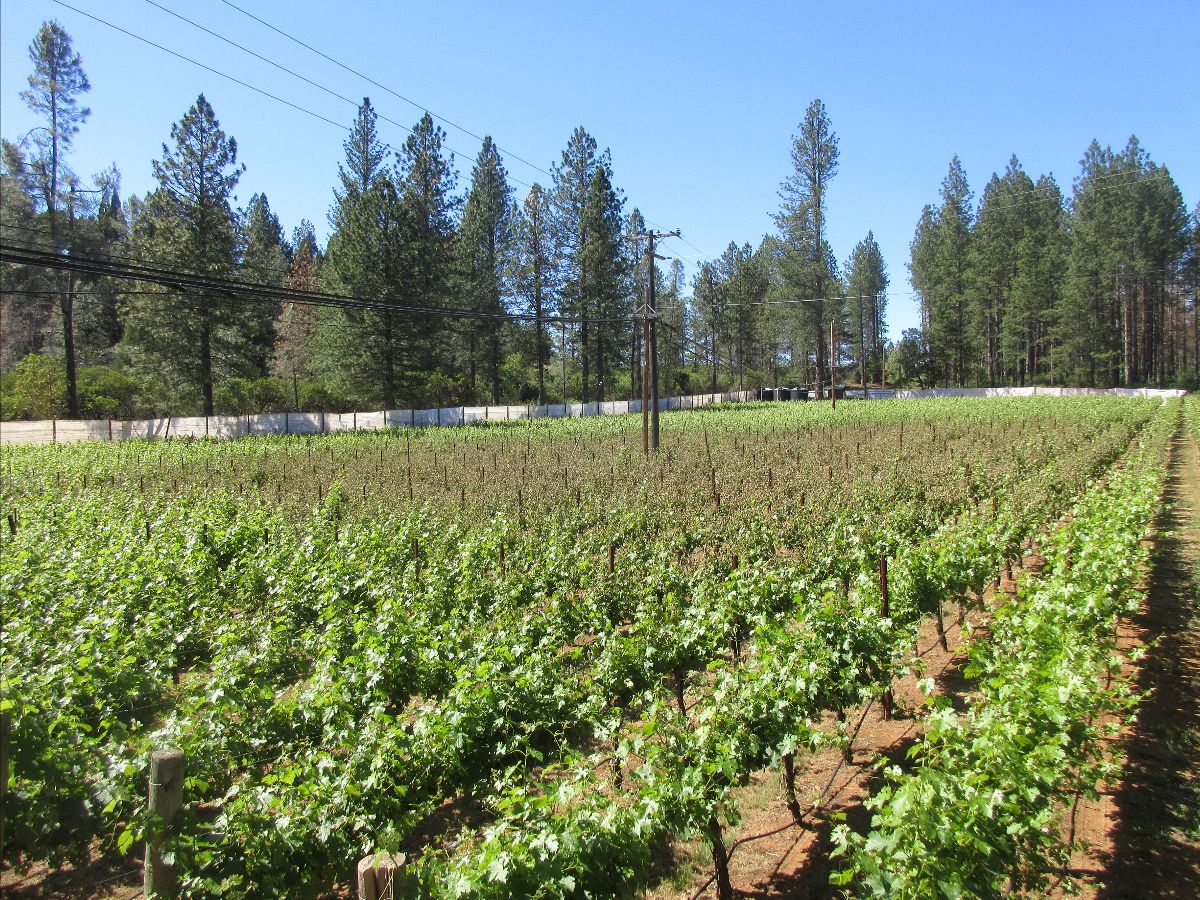 At approximately 5 am on May 20 the temperature in our vineyard plummeted to 28 degrees. During the following 2 hours about 900 of our vines, or 20% of our vineyard, sustained frost damage.

Among the vines, you can see the top of our green cold air drain which fought mightily to exhaust the frost layer from the vineyard. You also can see that all the frost tarps are in place and the cover crop between the rows is mowed to the ground.

Our vineyard manager speculated that we would have lost the entire crop if our cold air drain was not running. He’s probably right. That’s what happened in May 2010, the year before we installed the cold air drain.

Most of the shoots that were frosted turned brown within hours and the fruit growing on those shoots is lost for the season. The growth of the remaining green shoots is stunted and will not produce any fruit this year. The frosted vines should recover by spring 2022 and be fully productive next season. We move on…

Beginning May 26, 7 men spent 3 days suckering our vineyard. The photos show the same vine before and after it’s suckered. After pruning, the vines grow shoots everywhere from the base of the trunk all the way up to and along the cordons on each side of the trunk. We only want to keep the 2 primary shoots growing from each spur position. Those shoots develop the 2 primary grape clusters we hope to harvest. Every other shoot is a sucker that must be removed.

The 4 photos show the process of bloom or pollination. Grapevines are self pollinating. Bloom began shortly after the vineyard was suckered and lasted about 3 weeks. A successful pollination results in full and tight clusters. It’s too early to tell but we’ll know in a few weeks.

In mid-June, Barb began raising and connecting the 2 training wires on each side of the rows to the metal stakes. This is a very tedious and time consuming task. These are the same 2 wires we disconnected from each metal stake and dropped on the ground before the vineyard was pruned in March.

Notice how the shoots beyond Barb are growing across the row. The shoots must be tucked inside the wires so they grow straight up allowing sun to shine on the fruit as well as heat and air to circulate between the grape clusters.

While Barb tucked the shoots inside the training wires, Gerry used the tractor as a moving platform to disconnect the 700’ of frost tarps he hung on our deer fence immediately after the vineyard was pruned. Normally it’s a pleasure to remove the frost tarps. We quietly celebrate getting through another frost season without damage.

It’s a good time to remind ourselves that the frost damage this season could have been much worse. We move on…and count our blessings.