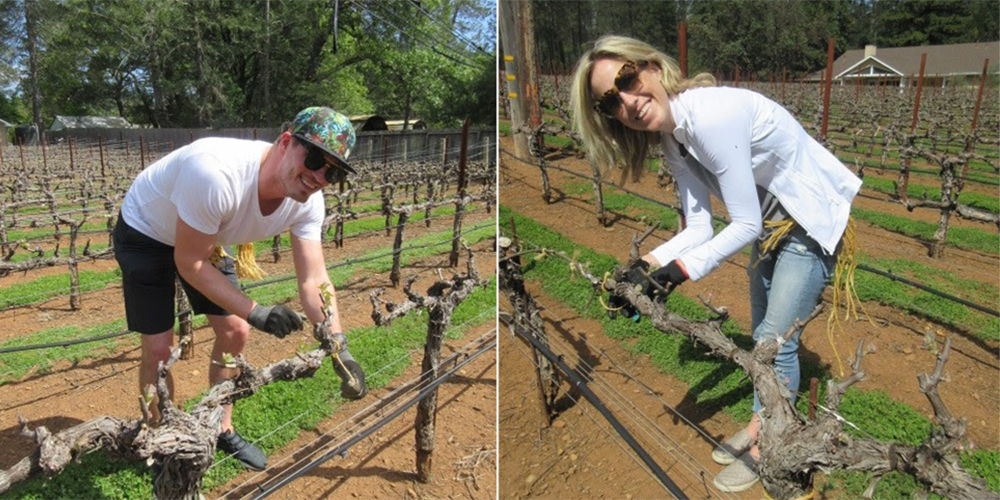 Meet our recently engaged daughter Shannon and her fiancé Alex. They visited us shortly after the vineyard was pruned on March 27. Alex made the mistake of asking Gerry if we needed help in the vineyard. Within 30 minutes they were tying the cordons to the training wires with twine. We only have 4600 vines. How bad can this be?

We later learned that Shannon doesn’t enjoy tedious manual farm labor as much as her mother. Huh. The next time Alex experiences an awkward silence sitting alone with Gerry, he’s more likely to ask Gerry if he wants a beer. 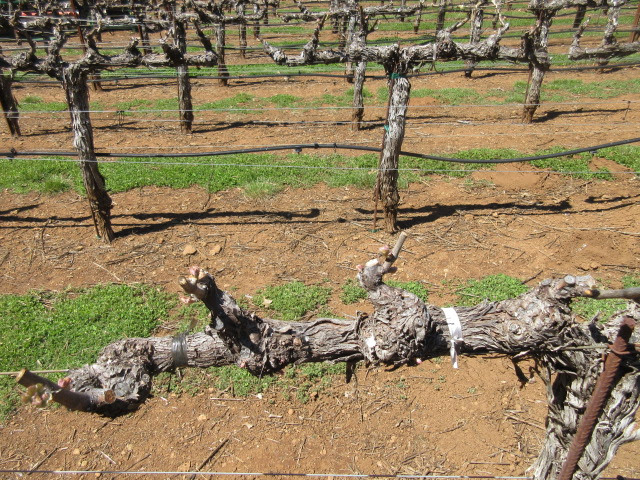 Bud break started in early April. The buds look like miniature pink flowers on the 4 spur positions. You can also see the plastic tape strangling the cordon. That’s what our vineyard manager wants us to cut off and replace with twine to increase energy flow. Does he mean energy flow from us or to the vines? 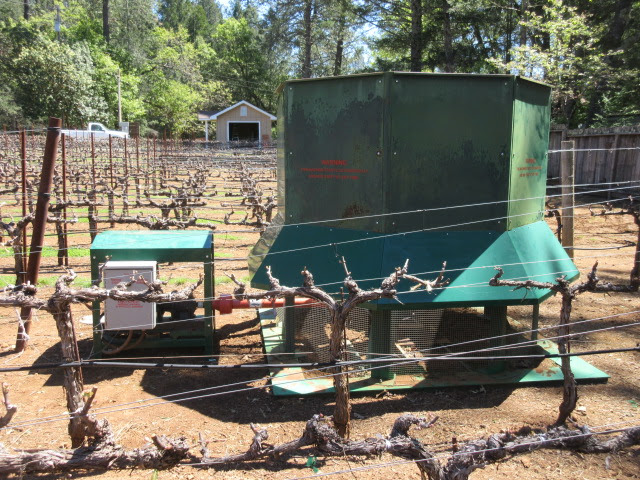 We were pleased to see bud break on schedule despite rainy and cold weather the first 2 weeks of April.  At bud break we begin worrying about frost. Our main frost fighting tool is the cold air drain in the photo. It has a 7 foot propeller that starts rotating automatically when the temperature falls to 34. It sits on the lowest spot in the vineyard.

When the frost layer accumulates on the ground, gravity moves it very slowly to the machine. The propeller sucks in the cold air and exhausts it high above the vineyard. If we can keep the frost layer below the cordons, we avoid frost damage. 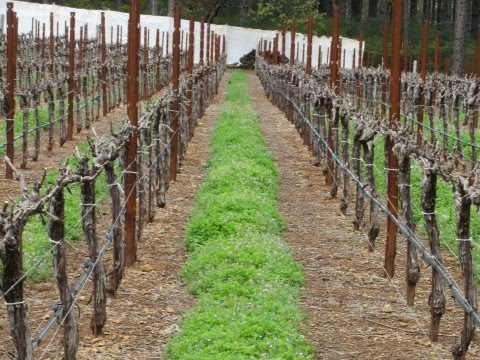 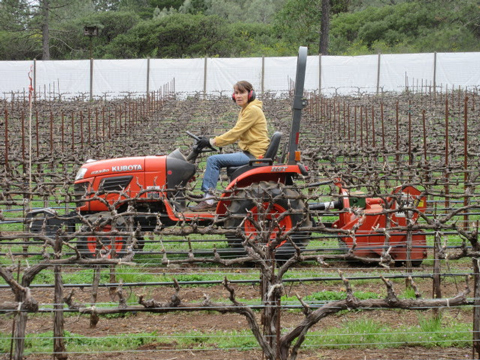 To help gravity move the cold air to the machine, Barb keeps the cover crop mowed to a 2” height during the 2 month frost season. You can see the frost tarps hanging on the fence. Our vineyard is mid-mountain. The tarps form a barrier that prevents the frost that forms above our vineyard from sliding into it.

Our cold air drain ran 4 nights in April, including the 17th, when the temperature fell to 30. Barb doesn’t get any sleep on frost nights because Gerry doesn’t sleep. If he hears our neighbors’ frost machines running, but not ours, he walks out to our machine in the pitch dark usually around 2 am to check the digital thermometer on the machine. It’s the same answer every time – the temperature is above 34. When our machine starts, he gets up every half hour to make sure it’s still running. What’s he going to do if it stops running? 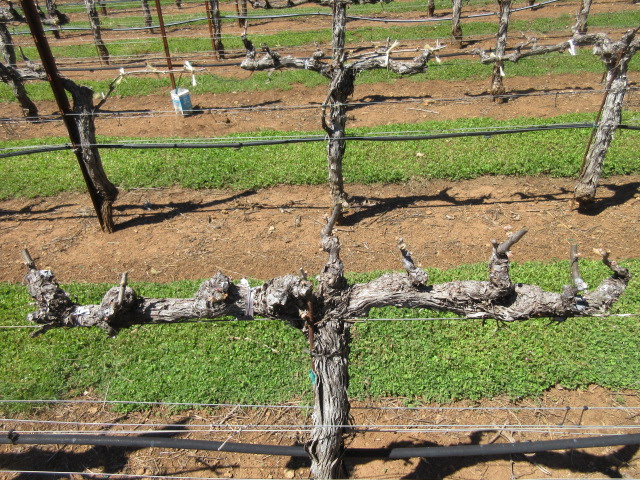 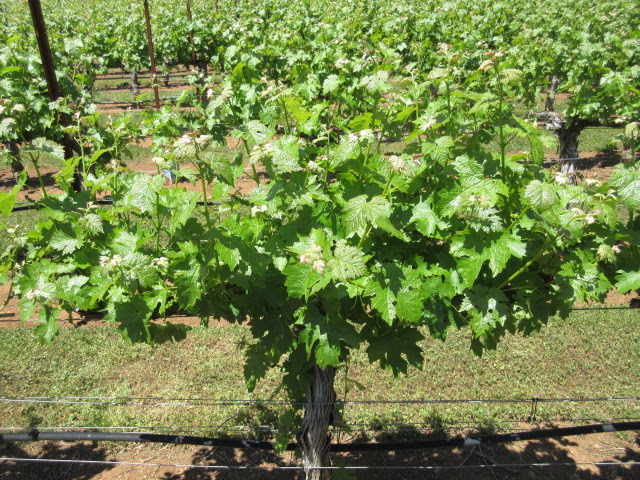 May continued the April pattern of cool temperatures, but no rain. May didn’t produce one 80 degree day. High temperatures were often in the 60s, 10-15 degrees below average. The photos show the same vine about 6 weeks apart. The vineyard development is almost identical to last year despite the cool spring. 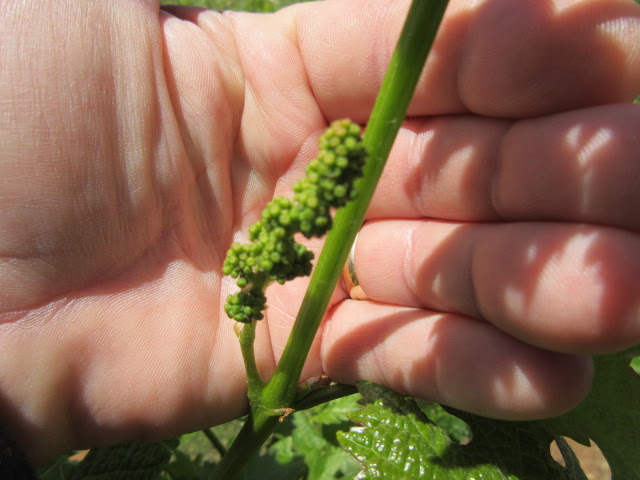 Your first look at the 2018 vintage

This mid-May photo of the grapes shows them smaller than BBs, bright green and inedible. In about 5 months they should be bigger than blueberries, deep blue, and delicious. 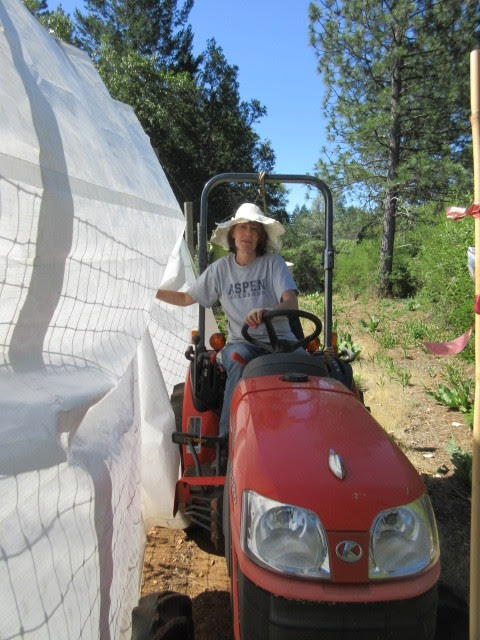 Our final spring task is to remove the 25 frost tarps we hung after pruning in March. We remove the tarps after June 1, if the 10 day forecast shows no frost threat. We had devastating frost damage in late May 2010 and 2013. Each tarp is 8’ tall and 30’ long. Barb uses the tractor as a moving platform to remove the bungees attaching the tarp to the fence wire. 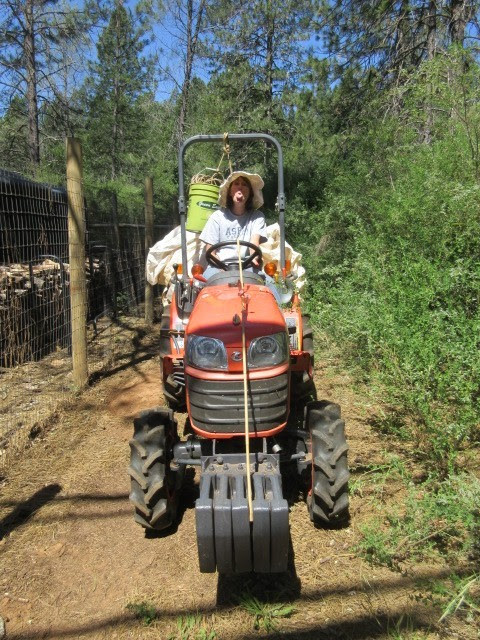 Is Barb sticking out her tongue?

Barb has discovered the joy of the tractor She won’t get off. What woman doesn’t dream of driving a tractor, right? It started in early April when she used the tractor to remove the prunings from the vineyard. Now she does all of the tractor work. She’s sticking out her tongue at a pouting Gerry. After nearly 39 years of marriage, we have something new to argue about.

There’s a simple solution to this dispute. We’ll just have to get a second tractor. Two tractors for a 2 acre vineyard? Sounds about right.