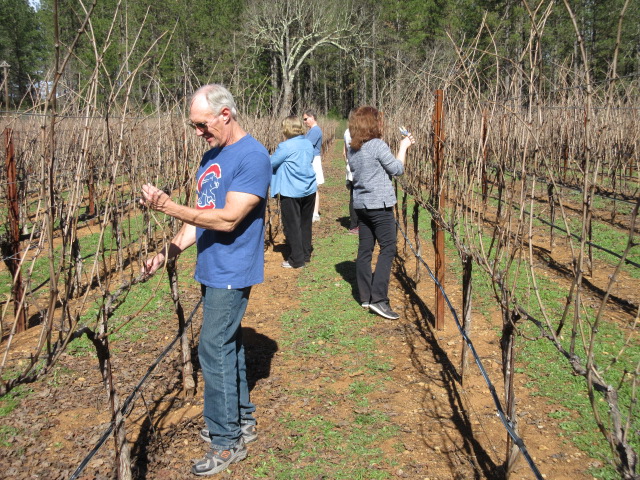 The season begins with preparing the vineyard for pruning. In the accompanying photos, college friends spending the weekend with us are separating the canes from each other and the training wires. This makes pruning much faster for the skilled pruners. 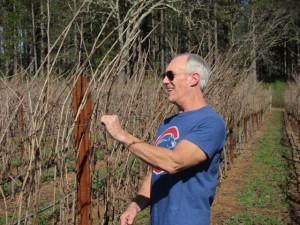 Our friend Randy is moving the training wires below the canes to get the wires out of the way of the pruners. 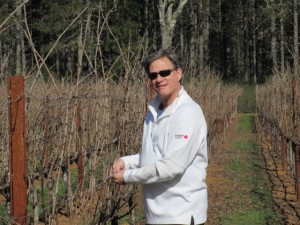 Our friend Lee is pulling on the canes to break the tendrils that attach the cane to the training wire.

Five hours after our friends started in the vineyard we declared it was time to stop for Happy Hour. Time goes so darn fast when you’re doing unskilled farm work. Our friends said it was the best day of their visit to the Napa Valley. Yikes. These people need to get out more.

If you’re thinking of visiting us, think twice. There’s no such thing as a free lunch. This is a working farm (although sometimes we wonder if it’s working).

The vineyard was pruned in late March in 1 day by 8 skilled pruners. They hand cut about 74,000 canes and dropped them on the ground. 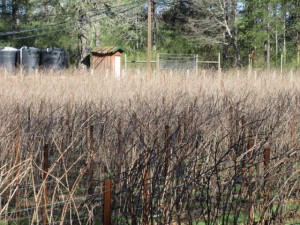 This is a portion of the vineyard before pruning. Note the density of the canes. 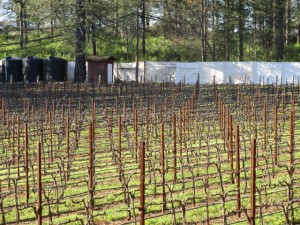 This is the same view of the vineyard after pruning. The frost tarps are hanging in the background.

The accompanying photos show a vine immediately before and after it was pruned. We have 4,600 vines and each vine has an average of 16 canes. 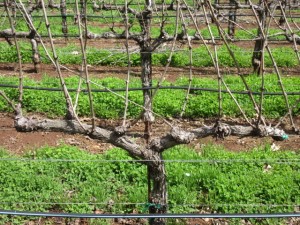 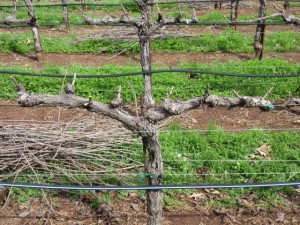 So what happened to the 74,000 canes the skilled pruners dropped on the ground? Gerry picked them up and took them to burn piles on our property. Seriously? Seriously. 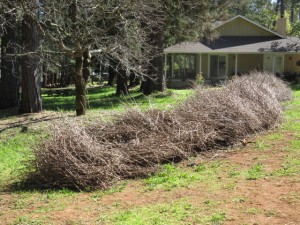 This burn pile is on the edge of the vineyard and it’s about 125′ long. In our next email blast, we’ll show you Barb’s bonfire. It’s her favorite day. 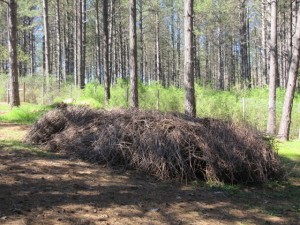 This is the second burn pile. It’s near the first pile but far enough away that we’re able to burn one pile at a time.

Do you remember the TV show Home Improvement with Tim Allen? Do you remember Tim “the tool man” was always modifying his power equipment to make it stronger, faster, and more effective? Gerry has some of Tim in him. 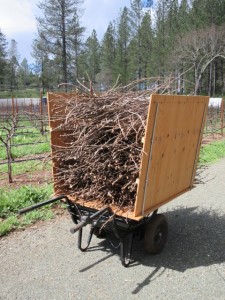 a giant wooden box on it. When it’s filled with canes, he can barely see over the top of it. This contraption is 5′ tall and 4′ wide. You should see him struggling to steady this unwieldy beast in our 400′ long vineyard rows that are so narrow he can’t stand between the thing and the vines. What a hoot.

After you stop laughing, consider this. He removed all 74,000 canes by himself in 2 days. You can imagine how much entertainment he provides for the skilled vineyard workers when they work side by side.

The skilled vineyard workers love him. He does all the work they don’t want to do. Livin’ the dream right? Periodically, he has to be reminded that the vineyard workers are laughing with him, not at him.

Plan to visit us soon. We’ll have you doing mindless manual vineyard work faster than you can say “Wow, it’s beautiful. I’ll have a glass of Zinfandel.” 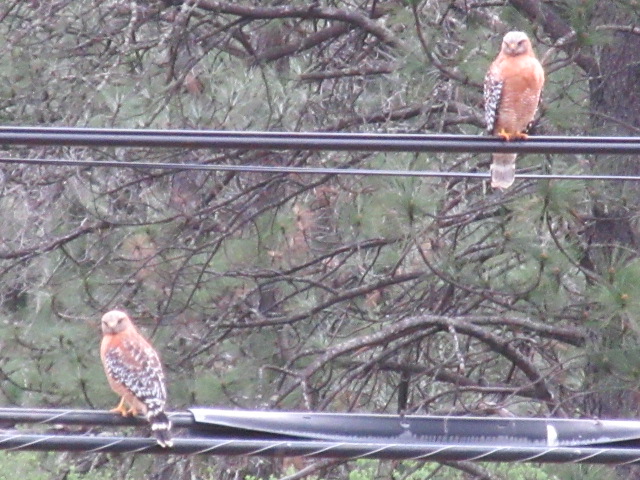 Also check out the above photo of the 2 Red Shouldered Hawks sitting on the telephone wires above our vineyard. It’s rare that they are patrolling together and more rare to see them sitting close to each other. These beautiful birds perform a very valuable service in our vineyard. We used to pay our vineyard manager to do what these 2 hawks do. The hawks do a much better job at a much better price. 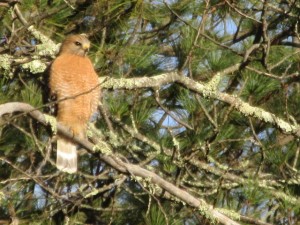 This is 1 of the 2 Red Shouldered hawks patrolling our vineyard from an Oak tree on the edge of our vineyard. The hawks are hunting for gophers, moles, and voles. Those critters dig holes and tunnels throughout our vineyard. They also chew on the vine roots and can kill the vines.
Our vineyard manager used to trap them. Since the hawks arrived, the critter population and related damage is greatly reduced.

How did we get these 2 hawks in our vineyard? That was easy. We installed 2 owl boxes and attracted 2 hawks. Close enough. 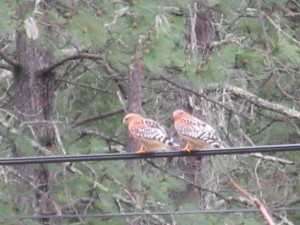 This is a serious hunting team! 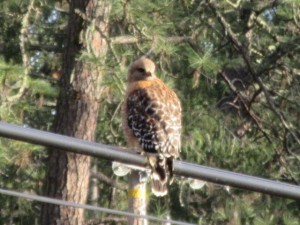 This is the same hawk with its head turned 180 degrees. It’s better than eyes in the back of its head. Amazing!

Our rain year is July 1 – June 30. To date we received 37″, about the same as last year but below the Howell Mountain average of 50″. The good news is that we received 13″ in March.

That is very good for the vineyards, and more importantly, for reducing fire risk in the fall.

Our 2014 Napa Valley Zinfandel and 2014 Howell Mountain Cabernet Franc were bottled last December. They are developing nicely in the bottle, but aren’t ready for release. The 2013 Cabernet Sauvignon from our vineyard, the first vintage under our label, remains in barrel and will be bottled in August.

In the meantime, we have a small amount of the 2013 Napa Valley Zinfandel remaining for sale.